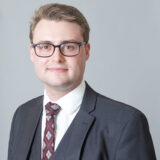 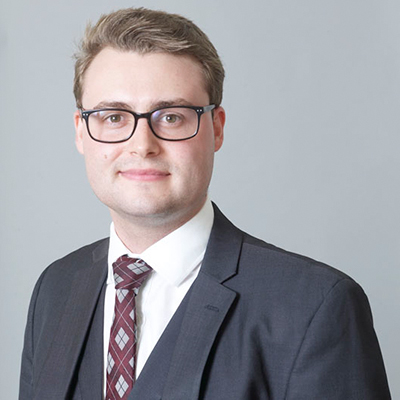 Ben is a Civil and Family Barrister who has appeared in courts of all levels up to the Court of Appeal. He is ranked in the 2022 edition of the Legal 500 as a Tier 1 Rising Star in the categories of Children Law and Social Housing.

He is well regarded for his impeccable manner with vulnerable clients, eye for detail and ability to grasp complex legal and factual themes. He has a friendly, welcoming and understanding approach which helps clients feel listened to. He fosters a culture of trust helping client be open with him and feel properly advised and supported in respect of their position.

His broad ranging practice across the spectrum of civil law, private children law and matrimonial finance allows him to provide holistic and practical advice to clients across the multiple legal matters their case gives rise to. He has unique expertise in all aspects arising from relationship breakdowns, whether married or not. His caseload regularly includes complex features such as domestic abuse (including rape and abuse towards children), parental alienation, relocation, occupation of the home, insolvency and homelessness.

Ben has an impressive and growing reputation amongst Public Access clients who are seeking to manage their own litigation with bespoke advice and advocacy assistance from a barrister.

Ben was called to the Bar by Middle Temple in 2015 as a Major Scholar. His impressive academic background includes a First Class LL.B in Law from the University of Hull, an LL.M with Merit in International Human Rights Law and Practice from the University of York, and multiple Outstanding grades on his BPTC at Nottingham Law School where he was also awarded a scholarship. He won a number of advocacy and negotiation competitions, and received an academic prize for his work in the University of Hull Legal Advice Centre.

Following his BPTC Ben worked for a Top 50 UK Law Firm as an Assistant Advocate undertaking advocacy, advice and drafting work. He was (and continues to be) a Presenting Officer for the Teaching Regulation Agency prosecuting teachers in cases of professional misconduct, and appeared regularly before the County Court in small claims trials, application hearings, CCMCs, quantum hearings and infant settlement approval hearings.

He completed his Pupillage under the supervision of previous member of chambers, and now District Judge, James Carter.

He is committed to work involving human rights elements and champions access to justice. He supports Advocate, the Bar’s Pro Bono charity, and continues to accept such instructions via them. He was a co-founder of the pro bono legal education programme ‘inFrinGeMent’ raising awareness of FGM. He has developed training for NGOs working with human trafficking survivors in South East Asia and has trained a Police Force in awareness around Travellers and Gypsies.

Growing up Ben had a number of real-world jobs from working on a market stall, to working behind a bar, through to being a Duty Manager in Boots advising on healthcare.

Outside of work, Ben enjoys cooking, hot curries, live comedy and a wide variety of music (including rock, indie, lofi and instrumental). He regularly travels in search of new foods and experiences. He also keeps a tiny puppy named after a very large and hairy Star Wars character.

Ben is instructed in a wide variety of civil and public law matters. He is an experienced trial and application advocate, regularly appearing for both claimants and defendants in Fast Track and Small Claim trials, possession hearings, tribunal hearings, high value CCMCs, interim application hearings and disposal hearings.

He has appeared in the Court of Appeal with success acting as Junior led by chambers Tom Russell in a Defective Premises Act matter – Rogerson v Bolsover District Council.

Ben also undertakes drafting and advisory work across the civil and public spectrum.

He has particular experience working with vulnerable individuals and acting for public bodies. His manner is such that he is often sought after where the other party is a litigant-in-person.

His areas of work include:

Ben undertakes a financial remedy (ancillary relief), private children and domestic abuse work from early directions hearings through to final hearings. He is an experienced trial advocate and is regularly instructed in Finding of Fact hearings with difficult and emotive subject matter, including rape and abuse towards children.

His broad ranging practice across the civil and family sphere give him particular expertise in all aspects of relationship breakdowns, whether parties are married or not. This includes child arrangements, division of assets, occupation of the home, non-molestation orders, repossession of the home and homelessness.

Rogerson v Bolsover District Council [2019] EWCA Civ 226 (Court of Appeal)
Led by Head of Civil and Family Team Tom Russell, Ben was  junior counsel on behalf of the Claimant in a Defective Premises Act matter. They were successful on both grounds of appeal, and the Court of Appeal used the opportunity to re-confirm the law in this area.

G v G & G (2021)
A successful application for a Wife under s. 37 Matrimonial Causes Act 1973 obtaining a freezing order and setting aside the disposition of a buy-to-let property. The Husband purported to hold the property on trust for his brother following the separation of the parties. There were allegations of fraud and foreign state corruption. The court agreed with Ben that the Husband’s actions were a sham.

TRA v Nicholas Walker (2021)
Regulatory prosecution of a teacher concerning allegation of recent and historic sexual misconduct with pupils/children. The victim witnesses were particularly vulnerable, with one as an adult still affected by the actions and giving evidence on matters occurring some 19 years prior. The teacher was prohibited from teaching indefinitely.

J v M (2021)
Multi-day Fact-Finding Hearing in which Ben’s client, a Father, had previously admitted poor behaviour and was facing serious allegations including strangulation, threats to kill and causing bruising to the child. There were difficulties with an interpreter and questions around whether they were accurately interpreting the accuser’s evidence. Despite this, Ben was able to ensure no findings were made against his client.

P & P (2021)
Fact-Finding Hearing at which Ben was representing a 16 year old child separately from her siblings. There were allegations against her Father of physical abuse, destruction of property, emotional abuse, controlling behaviour and alienation of one of the siblings from the others. Ben’s client would not be giving evidence meaning he was limited to cross examination alone to prove her evidence. Ben was able to present his cross examination in a considered way to display to the Court the Father’s nature when his behaviour was challenged, and satisfied the court that his client’s evidence was true.

T v B & A (2020)
Complex TOLATA/Insolvency matter. Ben was representing a Wife living in an adapted home with 3 disabled children. The property was in the Husband’s sole name. He was bankrupted and a possession order was made, both without the Wife’s knowledge. She applied to set the possession order aside. This was one of the early cases heard remotely following the onset of the 2020 Coronavirus pandemic. Ben’s client spoke very little English. The law in this area did not sympathise with her position. Nevertheless Ben was able to secure a declaration of her beneficial interest in the property and delayed an Order for Sale by 18 months by demonstrating the exceptional circumstances. This would allow her time to raise the funds to buy the Husband’s share and keep the property. The Judge commended Ben’s mastery of the case in circumstances where he had been instructed at very short notice on an emergency basis.

A v M & P (2021)
A very emotionally sensitive Final Hearing in which Ben represented a Special Guardian Grandmother responding to an application for contact by the parents who were each litigants-in-person. The matter was further complicated by a conflict in religions. Ben was able to successfully manage the hearing to secure an outcome favourable to his client and avoid her religious beliefs from being undermined.

Ben also offers bespoke training and those interested are encouraged to get in touch. Examples of his work include:

Legal 500 2022 – Child Law (Public and Private) Rising Star Ranked: Tier 1
‘Extremely good with clients, understands their concerns and ensures they understand even the most complicated of circumstances. Excellent attention to detail in a case.’