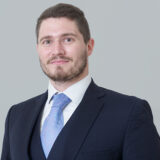 Edward previously qualified as a solicitor in 2012 and practised at two leading Leicestershire law firms before being called to the bar in March 2014 at Lincoln’s Inn. In May 2014 he joined a local Leicester based chambers before joining KCH Garden Square Chambers in September 2015.

In addition to his civil practice, Edward represents Claimants and Respondents in employment disputes. His experience of employment law started when he was a solicitor advising on TUPE transfers, consultancy agreements and compromise agreements. Since becoming a barrister, Edward has regularly been instructed to provide opinions on the merits of employment claims, undertaken judicial mediation and appeared at a variety of hearings in both the employment tribunal and county court.

Away from chambers Edward’s interest include playing rugby, cycling and travelling.

Since joining KCH Garden Square, Edward’s civil practice has expanded, he is regularly instructed to represent clients in respect of boundary disputes, personal injury disputes and housing disputes. He has been instructed on a number of licencing disputes including alcohol premises licence reviews and taxi licence appeals. Edward has a growing commercial litigation practice dealing with contractual disputes, shareholder and partnership disputes.