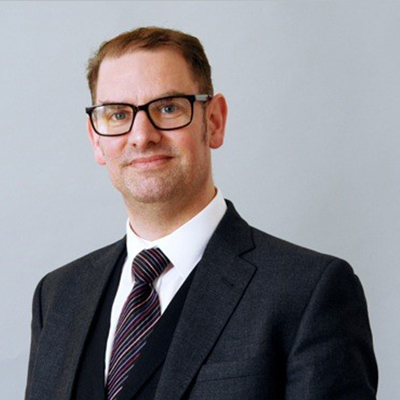 Chris Jeyes has over twenty years’ legal experience in both the civil and criminal courts at all levels, with particular skill in heavy paperwork and legally complex cases. Chris is currently a Grade 3 Prosecutor.

A Senior Scholar of Gray’s Inn, Chris was Called to the Bar in 2005, having graduated in 1997 with First Class Honours in Politics and Modern History at Brunel University, come top of his year with Distinction on the Postgraduate Diploma in Law at Nottingham Trent University in 2003, and achieved a “Very Competent with Outstanding aspects” grade on the Bar Vocational Course. Chris was also the overall Gray’s Inn mooting champion in 2005 and represented the Inn on its mooting tour of US universities.

As well as the civilian courts, Chris has appeared before the Court Martial, and has an interest in military affairs. In his spare time Chris is an instructor in the Army Cadet Force, and recently raised nearly £2,000 for military charities.

Chris is Public Access accredited, and a member of the Criminal Bar Association as well as the Human Rights Lawyers Association.

Chris has been led in several murder trials, all resulting in acquittal, and has dealt with numerous homicide cases without a leader, including one case of manslaughter by diminished responsibility which resulted in a suspended sentence.

Chris has been awarded his Red Bag for researching, preparing and presenting a highly complex legal argument relating to the impact of EU Directives on the UK criminal law – in a case before a High Court Judge and with five co-defending silks, all of whom adopted Chris’ arguments.

Chris also managed to obtain permission to appeal on a matter of Guernsey and human rights law before the Judicial Committee of the Privy Council over thirty years out of time, and subsequently presented the appeal before five Justices of the Supreme Court including the then President Lord Neuberger, without the aid of Leading Counsel. Although the appeal was ultimately unsuccessful (but perhaps unsurprisingly given that a previous attempt to appeal to the Board had been made on different points in the 1980s) Lady Hale, now President of the Supreme Court, described the legal argument as “ingenious” and the submissions as “full and able”, whilst the human rights argument was “deployed in an attractive way”. In order to present the arguments Chris had to teach himself the key aspects of the law of Guernsey, which has a fascinating legal system including elements of the Napoleonic Code Civile as well as Norman Customary Law.

Chris has spent a year as the clerk to a senior civil judge, a year as a Government Lawyer advising the Ministry of Justice, and a number of years as In House Counsel in a regional firm of solicitors, rising to partner with numerous other responsibilities including a caseload of high net worth foreign property investors. Earlier in his career Chris was a police station representative both in London and Nottingham, and Senior Crown Court caseworker in a highly regarded defence firm.

Chris has appeared before the Court of Appeal successfully on several occasions (see notable cases).

In the civil courts Chris has dealt with numerous complex cases ranging from a complex trusts application for a trustee in bankruptcy before a specialist Chancery Judge, to judicial review in the Administrative Court.

Operation Anaclastics – acting for the first defendant, accused of conspiracy to bring drugs and phones into prison. Taken to trial and acquitted on one drugs count. Arguments about exploitation and manipulation accepted by the Judge and lenient sentence passed.

R v. Welsh – appeal against sentence for dwelling house burglary. Sentence reduced by one third after Court of Appeal accepted that the sentencing Judge had wrongly categorised the offence as Category 1.

S. v. The Queen [2013] UKPC 7 – human rights appeal before the Judicial Committee of the Privy Council re Guernsey Law. Sole counsel, permission to appeal granted by Lady Hale 30 years out of time. Subsequent application to ECtHR.

Court Martial – defending Guardsman re JPA fraud. Sentence by the Board recommended NCO Cadre due to mitigating circumstances & commendations.

Operation Latious – conspiracy to supply Class A. Only defendant who held out for a trial, against Leading Counsel. Prosecution discontinued on the day of trial.

Operation Hauberk – defence in three-handed murder, as junior counsel. Only defendant to be acquitted.

R. v. Kinsella [2011] EWCA Crim 1275 – successful appeal out of time to the Court of Appeal in a proceeds of crime confiscation case arising from a gang robbery.

R. v. Dean – defence of a drunk driver who drove the wrong way up the A1.

“Your kindness, compassion, humour and warmth combined with your non-judgemental attitude made a traumatic period for us as easy as possible and for that we will always be grateful.” A client, 2018

“At a particularly stressful time, we found Chris very responsive and articulate and it was these qualities that helped us to avoid criminal conviction without having to pay the Council’s costs. Throughout the entire process, we were impressed with how focused and creative Chris was in his thinking, enabling him to mount a valid defence argument against all the odds.

We met two versions of Chris; the down-to-earth human being who shared endless cups of tea with us at our initial conference, whilst warding off our two Jack Russells. Then, the gowned and wigged ‘galleon in full sail’ who strode into Court and stood his ground in our defence. This is an individual who we would be more than happy to recommend and if, God forbid, we find ourselves in the dock again, he will be our first port of call.” A direct access client, 2019